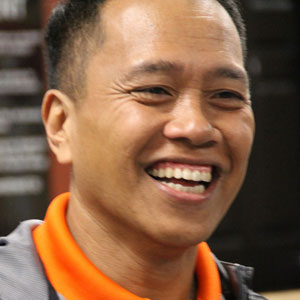 Master Apolo has over thirty-five years of experience in the martial arts industry, beginning his career as a student of Korean martial arts. He has worked in all areas of the industry: from the age of fourteen, working his way up from an assistant instructor to a full instructor and program director, running multiple locations, designing and organizing curriculum that managed fifty-seven locations for J Kim’s Institute of Tae Kwon Do.

Join master Apolo and learn the cultural indigenous fighting art of the Philippines- KALI. You might have seen Kali featured on the History Channel’s hit show “Human Weapon”, or the Discovery Channel’s “Fight Quest” as well as Hollywood blockbusters the Bourne Identity trilogy, I Frankenstein and The Book of Eli. Kali is a very complete martial art utilizing weapons, empty hands, kicking, striking, and ground fighting. Filipino history has seen the practice of Kali used over the years to help defend their families against foreign invaders. The art has even been practiced by a variety of Special Forces units worldwide. Kali practitioners are known for their lightning-fast movements and efficient footwork in wielding weapons. In this class, you will learn how to use weapons to protect yourself and devastate an opponent. LEARN how to transition from fighting with weapons to empty hands fluidly.