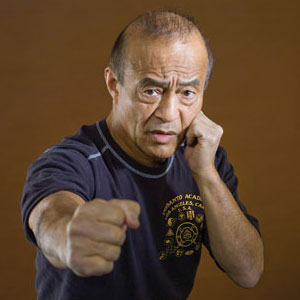 Inosanto is one of three instructors personally certified by Bruce Lee to teach his system of martial arts. The film I Am Bruce Lee provided Inosanto an opportunity to reveal a little-known fact about the friendship the two men shared. Inosanto was teacher to Bruce Lee, introducing him to nunchaku. Inosanto explained that he introduced the weapon to Lee, taught him the basics and some exercises to get him started on his weapons training. The Game of Death movie, one of the most recognizable of the Bruce Lee films, showcases the use of the nunchaku by Lee and Inosanto. The credit for nunchaku's introduction to Lee in the first place belongs to Inosanto. He is featured as the Black Belt Magazine's 1996 "Man of the Year".

Inosanto holds Instructor or black belt level ranks in several martial arts. He is known for promoting the Filipino Martial Arts. He is responsible for bringing several obscure forms of the South East Asia Martial Arts into the public eye such as Silat, a hybrid combative form existing in such countries as Indonesia, Malaysia, and the Philippines. He has recently acquired his black belt in the Machado family style of Brazilian Jiu Jitsu. Inosanto also trained Shoot wrestling under Yorinaga Nakamura. Currently he is the vice-president of Lameco International, carrying on the Eskrima of the late Filipino martial artist Edgar Sulite