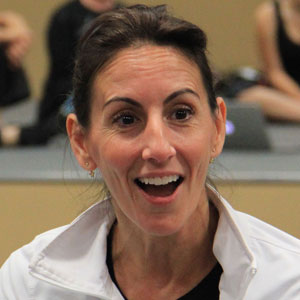 Katalin Zamiar is the owner of POW! MMA, Krav Maga & Fitness in Chicago, Illinois. She was the first to bring Krav Maga to Chicago. Katalin is the Head Instructor and Owner of a progressive martial arts school that has successfully blended martial arts, the combats sports and high intensity training formats for over 15 years. Her 7,000 sq ft facility is located in downtown Chicago offers 45+ classes a week in boxing, kickboxing, Muay Thai, Krav Maga, MMA, BJJ, sparring, interval training, strength and conditioning and yoga since 2001.

Katalin is a certified trainer and an international presenter in the martial arts and fitness industry with black belts in Tae Kwon Do, Goju Karate, Shorin Ryu Karate, and Shaolin Kung Fu. She has 30+ years in the martial arts, including 20+ years in boxing and kickboxing training, 12+ years in Muay Thai, Brazilian Jiu Jitsu, Krav Maga, and MMA training. In addition, she has been a fitness presenter for conferences like IDEA, Manias, Club Industry, FACT, Asiafit and Taeipei Fit. Katalin beyond her convention appearances has completed a 100 city lecture tour of the United States and 11 city tour of Mexico.

Katalin has starred in over 15 martial arts and fitness DVDs, she has written 4 manuals, and has over 200 articles published in magazines. She has spent many years covering the sport of boxing and MMA, writing for magazines such as Black Belt, Inside Kung Fu, Ultimate Grappling, Home Gym & Fitness, Chicago Boxing and more. Her most recent accomplishment includes authoring the book: Weight Training for Martial Arts: The Ultimate Guide and completing an Executive Business Program with Babson University.