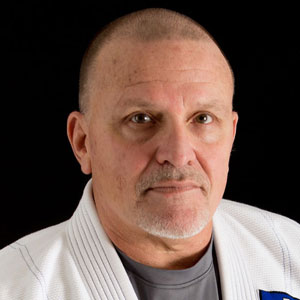 Larry is a 2nd Degree Black Belt in Brazilian Jiu-Jitsu under the legendary Master Rigan Machado, and is the Head Instructor at Jacksonville Brazilian Jiu-Jitsu in Neptune Beach, Florida. He is also the Regional Director for the Rigan Machado Jiu-Jitsu Association; and Founder of the BJJ program for children…Kid-Jitsu®. Kid-Jitsu® is a ‘Teach the Teacher’ program on how to effectively teach Brazilian Jiu-Jitsu to children in an organized, safe, and technically efficient manner; and includes our world class C.O.R.E. Character Development Program.

Looking for new ventures, and having been one of the first of the original Gracie Jiu-Jitsu Training Associations back in the mid 1990’s, Larry continued training in and teaching Brazilian Jiu-Jitsu, as a hobby. Over the next few years that hobby began to evolve into a full time program and he opened Jacksonville Brazilian Jiu-Jitsu in 2005, as a new career in the Martial Arts. During this transition, he saw a need for a curriculum for children in Brazilian Jiu-Jitsu and the development of Kid-Jitsu® began. The Kid-Jitsu® program has evolved to become a full scale online BJJ program for kids, online; in a ‘teach-the-teacher’ format.

Larry is also a former City Councilman in Neptune Beach, Florida and has been active in his community with church, his school, homeschooling his 9 year old, and is known to be a big family man! God, Family and BJJ are his main interests and he has dedicated his life to this lifestyle.